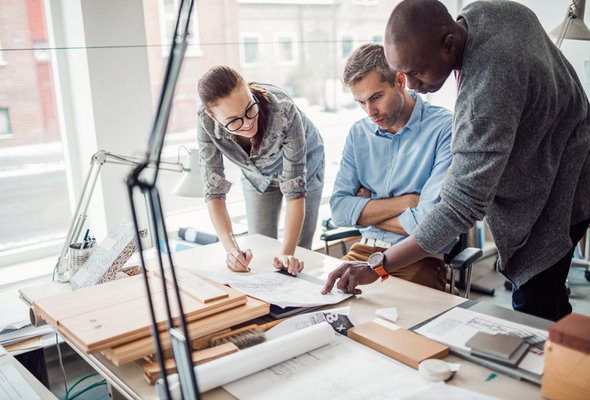 Have you ever wondered how much an architect earns? Becoming an architect requires an investment of money and time, but pays off in the form of a rewarding career that comes with above-average earnings. And for those lucky few who become âstarchitects,â itâs a path to fame. Letâs take a closer look at the average salary of an architect.

The Average Salary of an Architect: The Basics

Architectsâ salaries are fairly high, but what do the future job prospects look like for architects? The BLS releases a âjob outlookâ for the fields it studies. The job outlook predicts the percent by which the number of people in a given job will grow between 2014 and 2024. For architects, the BLS job outlook is 7%, which is around the average for all the jobs the BLS studies. The field isnât shrinking, but itâs not growing at faster-than-average rates either.

Related Article: The Average Salary of a Doctor

Where Architects Make the Most 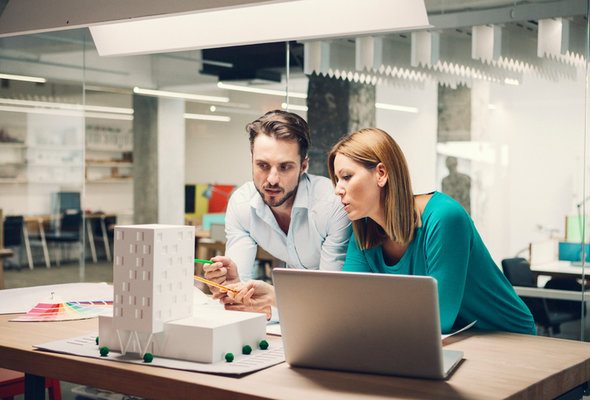 Related Article: The Cost of Living in California

The Cost of Becoming an Architect

The first step to becoming an architect is to earn a bachelorâs or masterâs degree in architecture. A poll by the American Institute of Architecture Students (AIAS) found that poll respondents (all architecture school graduates) had an average post-graduation student debt of $40,000. The students also reported spending thousands on extra costs such as modeling materials, textbooks and more.

After obtaining a degree (often a five-year degree), budding architects do an average of three years at an architecture internship. Finally, they must take the Architect Registration Exam (ARE). That means that even the fastest path to becoming an architect in the U.S. takes eight years, but most people take around 11 years. In the meantime, most of these aspiring architects are paying back student loans. The ARE also comes with stiff fees. Depending on which version of the exam you take, the exam fee itself is either $1,470 or $1,260. If you have to cancel your exam, the fees you pay are non-refundable. 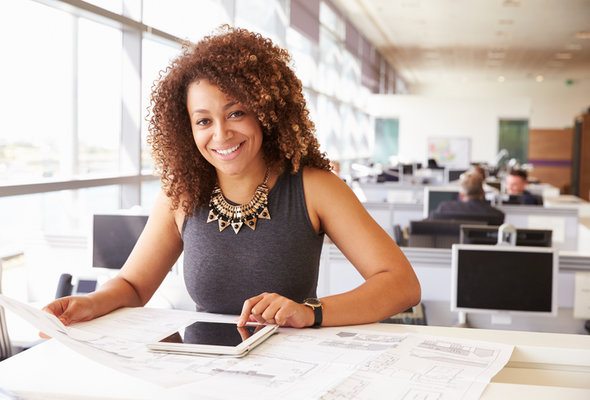 The job of an architect comes with glamour and prestige, as well as a high salary and a solid job outlook. However, the path to becoming an architect is a long and expensive one and not everyone who wants to become an architect makes it through the multi-year process. Still, if you have the discipline, talent and funds architecture is a financially rewarding career path.

Update: Have financial questions beyond an architectâs average salary? SmartAsset can help. So many people reached out to us looking for tax and long-term financial planning help, we started our own matching service to help you find a financial advisor. The SmartAdvisor matching tool can help you find a person to work with to meet your needs. First youâll answer a series of questions about your situation and goals. Then the program will narrow down your options from thousands of advisors to up to three registered investment advisors who suit your needs. You can then read their profiles to learn more about them, interview them on the phone or in person and choose who to work with in the future. This allows you to find a good fit while the program does much of the hard work for you.

The post The Average Salary of an Architect appeared first on SmartAsset Blog. 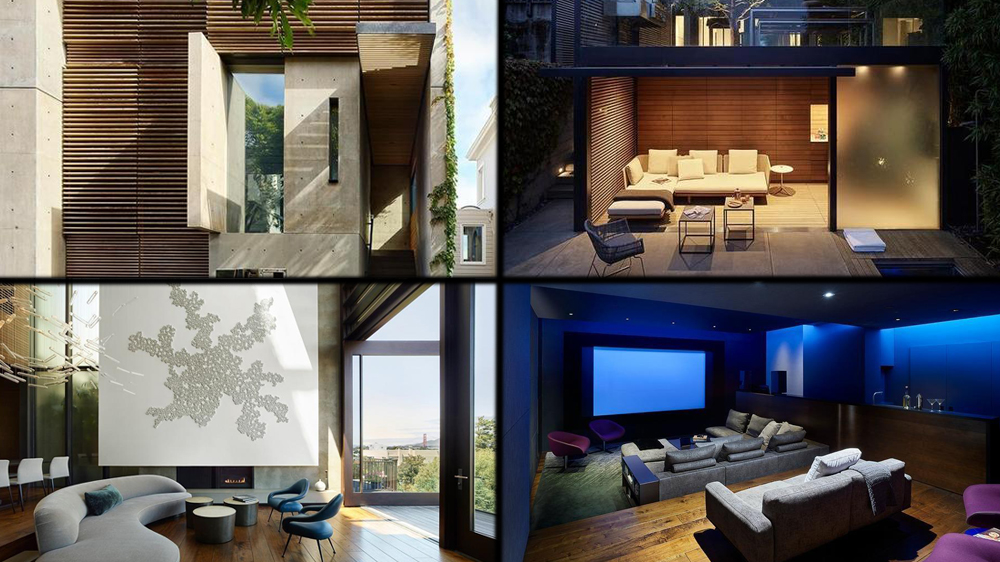 A new listing in San Franciscoâs Cow Hollow neighborhood has turned heads for its unique design, both inside and out.

The 4,185-square-foot home with four bedrooms and 4.5 bathrooms was built in 2016, is on the market for $18 million. It has an top-notch design pedigree that includes Aidlin Darling DesignÂ (architecture) and Andrea Cochran Landscape Architecture (landscape), who were honored with National Design Awards for the project.

Neal Ward and Rick Teed of Compass are handling the listing. Built in 2016 for the current seller, it’s available for the first time.

âThe architecture of this property is so striking, and the detail, from top to bottom, is perfection in every way,â says Ward.

While natural light is prominent in the interiors, so is privacy, thanks to exterior walls designed with wood slats. In addition, a walnut and stainless-steel kitchen can be easily separated by five frosted-glass panel walls that are designed to retract if the cook prefers privacy. The home also has a green roof.

Inside, 20-foot ceilings in the living room and a 13-foot-tall light sculpture above the dining room table add elegance. Pivot-hinge doors on the north end of the living room lead to a cantilevered deck offering views of the Palace of Fine Arts, Angel Island, Alcatraz Island, and San Francisco Bay.

Ward calls out the deckâs âbirdâs-eye view of the Golden Gate Bridgeâ as another huge highlight. The home is at the north end of a tree-lined block of single-family homes on Filbert Street, which means that it has some of the neighborhoodâs best views. It also has a green roof.

This home is built for entertaining. On the lower levelâexcavated into the home and beneath a rockâare a media room and DJ booth, as well as a wet bar. That area connects directly with the outdoors, where you’ll find a dining and grilling area, as well as a lanai, bamboo leaves, an outdoor TV, in-ground fire pit, and spa.

“The person that owns the house is into music, technology, and high-tech, and was able to have all of this done custom,â says Ward.

Another selling point is the location.

âThe Cow Hollow neighborhood is highly sought after because of its proximity to the Presidio and all the wonderful shops on Union Street, and Chestnut Street in the Marina,â says Ward.

Watch: You Can Take In Seattle’s Entire Skyline From This Historic Home

And while San Francisco is often linked with fog and cool temps, this neighborhood does get its fair share of sunlight.

Ward believes that a young couple or single personâparticularly a tech employee drawn to the custom features who is looking in this price rangeâwill snap up the property.

âItâs not a typical young family with younger children that canât have the separation from their parents,â he says, alluding to the master bedroomâs location on the top floor, with other bedrooms below. âIâve also shown it to people looking for a pied-Ã -terre, couples from New York City,â he says.

A four-bedroom townhouse with park views and tons of charm has recently hit the market, and we’re dying to tell you all about it. The listing, brought to market by Compass’ Michael J. Franco, is right next to Prospect Park, Brooklynâs second largest park, and has plenty of outdoor space (and a rooftop deck to boot).

The townhouse sits in one of Brooklynâs trendiest, most desirable neighborhoods — Park Slope — with its leafy streets lined with brick and brownstone townhouses, many of which were built near the turn of the 20th century and have been lovingly updated over the decades by young families migrating from Manhattan. Much like its neighboring properties, the 2,600-square-foot townhome at 15 Prospect Park was originally built more than a century ago in 1915 and retains its old-world charm — but has been carefully updated to meet modern standards of living.

With 4 bedrooms, 3.5 baths, a generously sized living room, and a finished basement, the Brooklyn townhouse also comes with a few rare features for a New York home: ample outdoor space and private parking (that includes a private garage and its own driveway).

The layout is split on three levels, with the first floor housing a large living room and open dining room — both with distinctive pre-war features like classic moldings and arches — and a renovated kitchen that opens up to a lovely terrace.

The second floor is home to 3 bedrooms and a sizeable landing which is perfect for either a library or a home office, while the third floor is dedicated to the primary bedroom suite and its massive walk-in closet, renovated bath with skylights and soaring ceilings, with a separate sitting area/den. The third level also provides access to the townhouse’s own rooftop deck, which adds more outdoor space and looks like a perfect place to entertain guests.

This Brooklyn Condo Has a Dreamy Backyard that Will Make You Forget Youâre in the City
Trophy Apartment Once Owned by Composer Leonard Bernstein Asks $29.5 Million
These 5 Unique Listings Will Remind You of Everything that Makes NYC Real Estate Special
This $16M NYC Penthouse Has Unobstructed Views of Central Park and the Manhattan Skyline

Miriam Schaeffer, a former executive at nail polish giant OPI Products, is looking to sell her Italian-style villa in Beverly Hills, CA — and won’t settle for just any amount.

The nail polish mogul — who is also the former wife of George Schaeffer, founder of the popular nail polish brand —Â is asking a hefty $33 million for her opulent home set in one of the most sough-after streets in the area, Roxbury Drive, a historically popular address among celebrities.

Located on N. Roxbury Drive, the property has a rich history and has been considerably upgraded and expanded in recent years. In fact, Schaeffer invested heavily in the property, expanding its footprint by roughly 40% and significantly boosting the amenity roster.

Originally built in 1926 by the architectural firm Camduff and Camduff as one of the partnersâ own homes, the architectural masterpiece was revamped by renowned architect Richard Manion in 2016. The current owner worked alongside the architect to add amenities like a media room and a wine cellar, and to expand the beautiful grounds.Â

The combination of Spanish, Italian, and Mediterranean revival architecture is probably why this property is also known as Casa California. Itâs a perfect representation of relaxed California living, featuring a long list of fun amenities that includes a fitness studio, a media room, a spa, and a swimming pool.Â

The property offers roughly 210 feet of frontage along N. Roxbury Drive, also known as ‘street of the stars’ (a highly popular destination for celebrities living in Beverly Hills), but it also offers privacy from prying eyes via a gated and hedged entrance.

The mansion has 7 bedrooms, 13 bathrooms, and an impressive total of 13,765 square feet of living space.Â The rear grounds are home to the pool, the spa, a guest house, and a fitness studio, all surrounded by complete privacy and tranquility.

Inside, a two-story entry greets visitors, leading to a living room with a stunning fireplace and doors that open to the front grounds.Â There is also a state-of-the-art chefâs kitchen, complete with a breakfast room and a wood-paneled family room that opens to the pool.Â

Upstairs, there is a gorgeous master suite that incorporates a sitting room, custom-made closets, and a terrace with fabulous views. Thereâs no shortage of space for family or friends, as the upper levels also include no less than 5 guest suites.Â

Additional amenities include a wine cellar, an elevator, an entertainment room, and a bar, making this house perfect for any type of entertaining.Â

This luxurious N. Roxbury Drive property is marketed by The Agency, with Jacob Dadon handling the listing. The current owner is Miriam Schaeffer, the former wife of George Schaeffer, who founded the popular nail polish brand OPI.

Schaeffer bought OPI (then Odontorium Products Inc.) in 1981 in Calabasas. At the time, the company was in the dental supply business, but Schaeffer and partner Suzi Weiss-Fischmann turned the brand into a global nail polish giant. The brandâs products were used in movies like Legally Blonde 2 and Alice in Wonderland, and they are known for their chip-resistant formula and bright colours. The company was acquired by Coty, Inc. in 2010, and Schaeffer stepped down as CEO in 2013.Â

Miriam Schaeffer, George Schaefferâs ex-wife, once worked as an executive and treasurer for the brand. She reportedly purchased the opulent house in 2012 for $14 million, according to Mansion Global, and invested in expanding its footprint by nearly 40%, alongside architect Richard Manion.